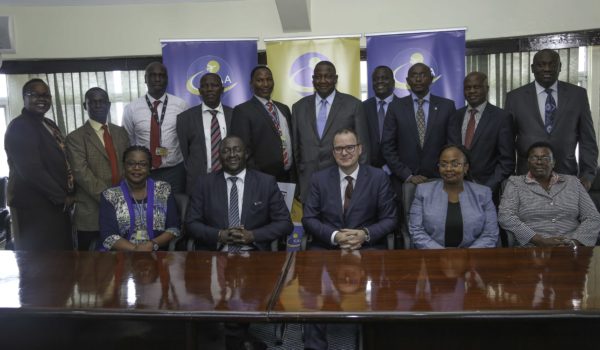 NAIROBI NOVEMBER 21, 2016 – The new Managing Director and CEO of the Kenya Airports Authority (KAA) Jonny Andersen has officially taken over, opening a new chapter for the organization.

Mr Andersen takes over from Nicholas Bodo, who has been heading the authority in an acting capacity since July 2016. Until his appointment to the helm of KAA, the new Managing Director was Director of National Airports at Avinor AS, a state-owned firm that manages airports in Norway, with responsibility for seven state-owned airport hubs.

Speaking during the handover ceremony, Mr Andersen said that the task at hand is to set KAA for the future and to build the biggest aviation hub in the region.

“This is a pivotal time for KAA. Africa is rising; and the whole world is looking to it as the next frontier for growth. With its strategic geographical location, Kenya is an ideal gateway into the continent, and a regional aviation hub. I look forward to harnessing this potential to build prosperity for the authority and the country as a whole. We aim to not only provide bespoke infrastructure for the aviation industry, but also, from a commercial point of view, to efficiently deliver safe and secure aviation services for the country into the future. At the centre of our work will be people, strategy and execution”.

A career aviation professional with over 21 years’, Mr Andersen holds a Master of Science degree in Air Transport Management from Cranfield University in the UK; and Bachelor of Business Administration in Logistics from BI Norwegian School of Management in Norway. He also studied Chinese Business, Trade and Commerce at Fundan University in China; as well as Aviation Law at CAE Inc in The Netherlands.

The Chairman of the KAA Board of Directors, Julius Karangi, said: “Today, we open a new chapter and a fresh beginning for KAA. The management and board of KAA aims to deliver a world class experience to airport users with zero tolerance to graft”.