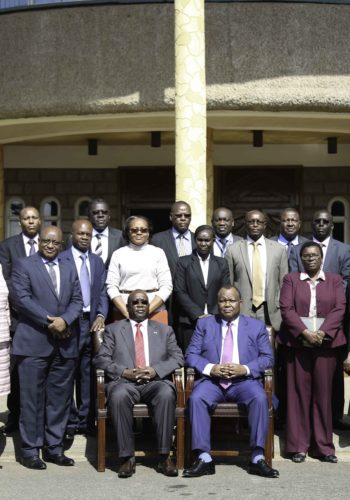 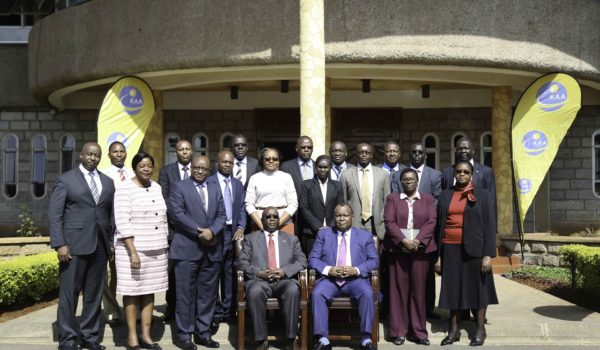 The passing of the Baton of KAA’s leadership was done at the KAA offices this morning in the presence of the authority’s sitting Board Members and KAA Ag. Managing Director, Mr. Yatich Kangugo.

The Retired Inspector General has held the authority’s chairmanship since December 2014.   During his tenure, Jomo Kenyatta International Airport, KAA’s flagship airport has undergone an exponential expansion phase; this includes the launch of the airport’s Terminal 2 and the completion and operilisation of JKIA’s new Terminals 1A and 1E which have seen the airport’s capacity shoot up from the original 2.5 million to 7.5 million passengers annually. During this time, the airport was also named as the most improved airport in Africa in the Airports Council International (ACI) Airport Service Quality (ASQ) awards. Kimayo also over saw the development of the airport’s state of the art primary security screening facility, which is one of its kind in the region.

KAA’s new Chair and former Chief of Defence Forces General Dr. Julius Karangi noted that he was determined to pick up the challenge and continue the good work of his predecessor. Gen. Karangi is taking up KAA’s baton of leadership at a time when Kenya is strongly campaigning to achieve CAT1 Status which will open doors to direct flights between Nairobi and the United States of America.

Gen. Dr. Karangi holds a Masters of Science (MSc) Degree in Security and Risk Management from the University of Leicester (UK),an Honorary Doctorate on Humane Letters (Honoris Causa )from Kenyatta University, Kenya and is also a recipient of the United States of America Award of Degree of Commander, The Legion of Merit. He also holds National Honours and Awards of Elder of the Order of the Golden Heart (EGH), Chief of the Order of the Burning Spear (CBS) and Distinguished Conduct Order (DCO).